In September 2015 Carl Ardery, grandson of Frank Ardery the longtime ticket agent at the Aiken depot, spoke to members of the Friends of the Aiken Depot (FARD) and guests about his grandfather’s experiences at the Depot.  His presentation included highlights from a scrapbook that Mr. Ardery had compiled during his tenure in Aiken.  Following is Part Two of a series of write-ups outlining some of the highlights from that presentation and scrapbook. 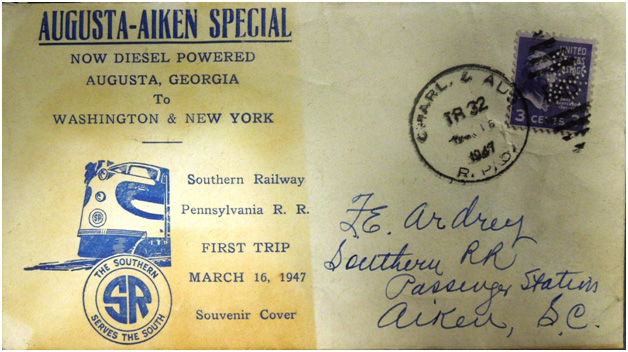 When railroads inaugurated new services such as a new passenger train, or assignment of diesel locomotives to a formerly steam powered train, they would frequently issue commemorative envelopes announcing the change. This envelope marked the first diesel powered Augusta-Aiken Special in 1947.  Notice that it is postmarked on board train 32 and the postage was 3 cents. 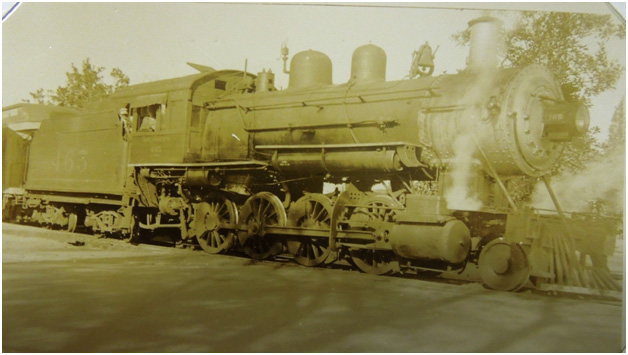 Locomotive 465 is typical of Southern Railway locomotives used in freight train service.  As pictured above, however, the locomotive was serving in passenger service.  More than likely it is either Train 17 or 18 operating between Charleston and Augusta. Trains 17 and 18 closely followed the original 1830’s route of the South Carolina Railroad and passed through all the towns displayed in the Depot Museum dioramas.

Locomotive 661 is another example of a Southern Railway freight locomotive being used in passenger service.  In this photo the edge of the Aiken train shed can be seen along with the end of a typical railroad box car.  The train is believed to be number 131 or 132 operating between Edgefield and Aiken.  Both 131 and 132 were “mixed trains” meaning they transported both freight and passenger cars in the same train, which accounts for the boxcar.  131 and 132 connected with the Aiken-Augusta Special (Trains 31 and 32) at Trenton, SC, and brought the Aiken section sleeping cars and coaches to Aiken.  For many years the Aiken-Augusta Special was the primary transportation for wealthy northerners between New York and Augusta/Aiken.