The City of Aiken’s Visitor’s Center and Train Museum 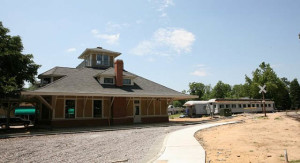 After more than ten years of planning and fundraising and a year of construction, the railroad depot has been replaced on the original site. It looks very much like it did between 1899 and 1954, but using modern insulating and building materials, which will make a more efficient building. The original frame edifice would have been difficult to heat and cool by today's standards. The grand opening took place on Saturday, September 18th, 2010.

The City of Aiken's Visitor's Center and Train Museum occupies the facility and is also available for events such as meetings and catered affairs. As fundraising continues, the caboose and the interiors of the two dining railroad cars will be refurbished and made available for the public to rent for events. The second, or mezzanine floor, is open in the center giving first floor visitors a beautiful view to the third level cupola. Nine dioramas depict the towns along the original South Carolina Canal and Railroad Company right of way. This railroad became the first designed steam powered commercial railroad in the United States and the longest railroad in the world. The dioramas accurately show Charleston, Summerville, St. George, Branchville, Denmark, Blackville, Aiken's freight station, Aiken's passenger depot, and Hamburg, near North Augusta, as they were in the year 1916. These dioramas are done in the familiar HO scale. The dioramas are complimented by interactive displays depicting railroad history. There is also a three and one quarter inch gauge toy model of the Aiken-Augusta Special which brought northerners from New York to Aiken (a 30-hour trip) during the early part of the last century. The freight station was bustling, with as many as 1,000 horses per year arriving in the fall and returning to New Jersey, Pennsylvania, New York and New England in the spring.

The all steel dinning car closest to downtown Aiken was built for the Illinois Central Railroad (IC RR) by the Pullman Car Company in 1920 as a coach. Although it was in rough shape when it arrived in 2006, it had less overall damage than the older car to the East. The configuration of the vestibule nearest the depot allowed the C. Graham Co. to convert it to an observation deck. Such cars were normally at the end of passenger trains.

The older dinning car was built in the 1910 - 1916 era also by the Pullman Car Company for the Frisco Railroad. It outweighs the IC RR car by about 40 tons. It was originally built with a steel frame and wood covered as were cars built during the transition from wood to steel cars. Part of the original wooden roof is still intact and visible from inside on part of the car. Also typical of the era, the roof has a raised center structure called a clerestory that contains small windows that the conductors could open and close with a long pole allowing for heat to be contained or removed as needed. The all steel caboose was built in the early 1970's by the Seaboard Coast Line railroad. It was normally placed at the end of a freight train as the conductor's office and as a shelter for the rear end flagman and brakeman. The cupola on the roof provided a vantage point from which railroaders could view the train for possible problems while in motion. Cabooses have not been used since the 1980's when train crews were reduced in size. We hope to complete the interiors of all three cars as additional funds are received from donations. The cars will be fitted inside as dining cars. The caboose will be restored to near original condition as an historic artifact to complement the museum on the second floor of the depot. We also hope to find out more information about the working history of the cars in the future.