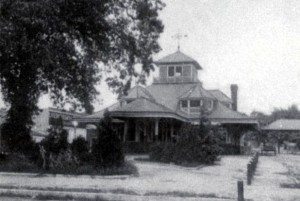 Why did the Southern Railway build such a handsome depot in Aiken in 1899 which was far more elaborate than most of its other stations? We think we know.

In the winter of 1891-1892, New York socialites Thomas and Louise Hitchcock, (the Hitchcock family had been associated with the New York Stock Exchange for three decades), spent the colder months of the year in Aiken because it was a beloved place of Louise Hitchcock's youth.

Mr. Hitchcock immediately recognized Aiken as the ideal place to train young thoroughbred horses because the ground never froze, the water was pure and soft and the sand/clay soil provided the perfect footing for the fragile ankles of young horses.

The next winter, the Hitchcocks started inviting their high society friends to spend "the season" in Aiken playing all manner of outdoor sports. Mr. Hitchcock's friend and business partner, William C. Whitney, another stockbroker and one of the richest men in the country, followed them down and also fell in love with the charms of Aiken. Together, in 1892, they built a thoroughbred training center, the first four holes of fabled Palmetto Golf Club and began putting together land for fox hunting that would eventually grow to over 8,000 acres.

Scores, even hundreds more of the "swells," of Park Avenue began to arrive every fall and stay until mid-March and what came to be known as the Aiken "Winter Colony," thrived here throughout the first half of the Twentieth Century.

Tragically, in 1898, Whitney's beautiful young bride Edith Randolph Whitney, suffered a horseback riding injury in what is now known as Hitchcock Woods, but what was then, part of the Whitney Trust. She died in May of the following year.

Legend persists that Whitney had Edith, while still in her bed, hurried back by train to doctors in New York, but blamed the earlier tiny Aiken depot as a reason for a critical delay in her care. As a result of his tragic loss, Whitney championed the building of a new and much larger depot.

There is no doubt that Stanford White, the most famous architect of the day, worked on many projects in Aiken, New York and Newport, R.I., for Whitney. These include the Palmetto Golf Club clubhouse and Aiken's court tennis court in 1902, his opulent Joye Cottage and even Whitney's stables and squash court next door.

Although our beautiful new depot was built from the original drawings, there was no architect's name on them. But comparing the dramatic ornamental similarities among the Palmetto, Joye Cottage, the stables and the depot, it is hard not to believe that the depot design was the work of the great Stanford White.

The beautiful Aiken depot served local travelers going to Charleston or Augusta and beyond, as well as thousands of Winter Colonists that came here for many decades. Many of their descendents still live here. That building was demolished by the railroad in 1954 when the railroad ceased passenger travel to Aiken. 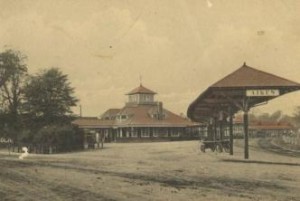 Aiken Train Museum History Through most of the old depot's life, people of all ages and of every status were greeted by Frank Everard Ardrey, who worked as ticket agent and depot manager from 1922 until his 1954 retirement. In addition to his popularity as depot manager, he was also known as Mr. Tennis. He taught tennis to many locals and visitors. Jerry Whatley was the long-time Railway Express Agency representative during most of those same years. Mr. Ardrey's son, Frank, Jr., was a lifelong sales manager in Birmingham for the Southern Railway and became famous for his photographs of steam engines.

Using the original drawings, project architect McDonald Law replicated the exterior of the original depot but altered the interior only to satisfy modern construction requirements and current uses. The Aiken railroad depot will once again contribute to Aiken's economy and quality of life by continuing to serve its citizens and visitors for generations to come.