During the 1920’s and 1930’s passenger trains were the primary transit mode for Northerners headed to Aiken to enjoy a season of golf, tennis and equestrian activities.  Beginning in 1928 the train of choice between New York and the Northeast and Aiken was Southern Railway’s Aiken-Augusta Special, Number 31 (southbound), and Number 32 (northbound).  Passenger cars terminating in Aiken were interchanged in Trenton, SC with train 131 (southbound) and train 132 (northbound). 131 and 132 operated as a mixed passenger/freight train between Edgefield and Aiken passing through Trenton and picking up the Aiken car(s) enroute.  The Trenton interchange was the normal route for 31 and 32.

Recently a March 1937 Southern Railway timetable was donated to the Depot Museum.  It is rare and unique in that it illustrates a previously little known alternate route into Aiken. This alternate route is best described in Albert  Langley’s book Southern Railway System, A History of the Premier Carrier of the South (autographed copies are available in the Depot gift shop) as follows:

“Although the Aiken-Augusta Special normally operated south of Charlotte via Columbia and Trenton to Augusta, for a brief period, during the late 1930’s, the train ran via Blackville, SC.  This eliminated the necessity of the mixed train handling the Aiken sleeper from Trenton and offered improved scheduling.  (Early morning arrival at New York was always sought.  The route via Blackville allowed a 9:15 AM arrival enabling businessmen a full day of work upon reaching the ‘Big Apple.’)”

A copy of the Aiken-Augusta page from the timetable illustrating this “brief period“Blackville route is included.

In 1952, the Aiken-Augusta Special was renamed the Augusta Special.  Later on Aiken was bypassed as a stop. Aiken passengers exited the train at the Graniteville station where as noted in a 1964 timetable, “Bus and taxi service available between Graniteville, SC, and Aiken, SC, a distance of about four miles.” 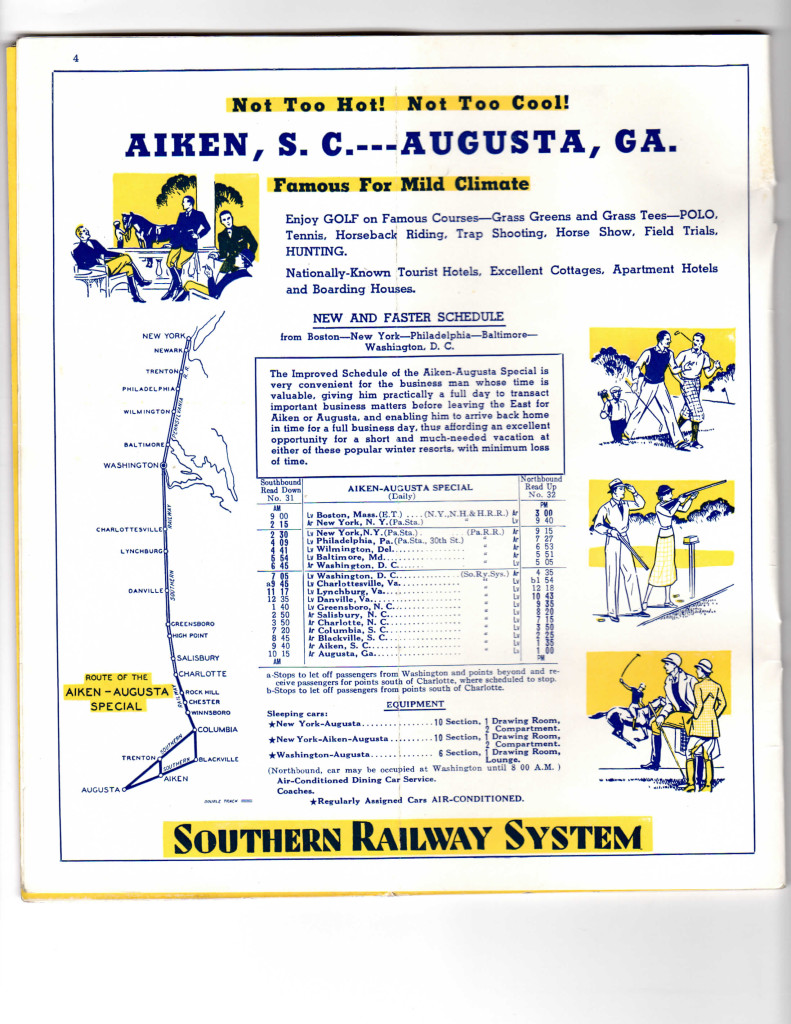 When Aiken celebrated its centennial in 1935, Southern Railway published a pamphlet featuring a history of the “Best Friend of Charleston” to coincide with the train’s Aiken visit for three days in April 1935.  The pamphlet also included advertising for its passenger services- including an indication that one could travel one way in coach service for 1 ½ cents per mile.  An original of this rare pamphlet was recently donated to the Depot and is on exhibit at the Aiken Visitors Center and Train museum.