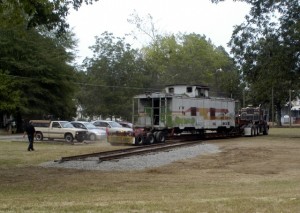 .• The Aiken community in proximity to Union St. will experience significant economic revitalization, which will result in an increased tax base for the area.
•Children and adults alike will learn the historical significance of the Aiken Railroad Depot as it relates to Aiken, South Carolina and throughout the world.
•The history surrounding the founding of the Aiken Railroad Depot offers a renewed rich heritage for Aiken residents.
•The re-creation of the Aiken Railroad Depot will offer Aikenites a new venue for civic and family events, a place for families to enjoy the park setting and its many amenities.
•The elegant architecture of the restored Depot will add beauty and enrich pride and the quality of life for the residents of Aiken.
•As a stop on the South Carolina Heritage Corridor, the new Depot will stimulate tourism and community development for the Greater Aiken area.
•Schools from miles around will make the Depot an annual event as an interactive educational field trip for their students to learn the history of the City of Aiken, Aiken County and South Carolina.
The main Depot room and two vintage, restored dining cars (when complete) will offer new hosting venues for businesses and residents to cater business meetings, parties, family reunions, weddings and other celebrations. 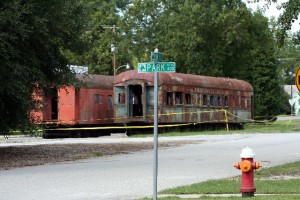 The Aiken Railroad Depot was constructed in 1800's and it was the first Depot of its kind in the State of South Carolina. It was built in the city's downtown and it was a major railroad center for a long time. In order to maintain this unique local landmark, the city of Aiken is reconstructing the Railroad Depot. Preserving Aiken's historic character and cultural heritage will improve the city's amenities and attractiveness as well as impact its economy. Once reconstructed, the Depot will blend very well with the Aiken's overall economy. By reconstructing the Depot, the city will create rentable space for public and private functions. The new Railroad Depot site will allow South Carolina and Aiken residents as well as tourists from other states to enjoy this unique, historic site. The new Depot will revitalize several blocks of the downtown area and increase property values. In addition, substantial benefits to the economy through the creation of jobs, labor income, and output will result from the reconstruction.

An economic impact study conducted by Dr. Sanela Porca, at the School of Business Administration at the University of South Carolina, Aiken, in 2007 concluded that the estimated effects of the Aiken Railroad Depot project on the City of Aiken's local economy are as follows:
Estimated Effect of Tourism Tourism activity generates a wide variety of benefits to local economies such as tax revenues from travel-related expenditures and new employment opportunities. When tourists arrive in an area, they spend money on products and services acquired from the local business community. Businesses that benefit directly from tourism include lodging establishments, restaurants and bars, recreational facilities, gas/convenience stores, and retailers. From an economic perspective, the Aiken Railroad Depot project is going to have a very positive effect on the local economy. The study estimates that the total annual output effect due to tourism will be more than $1.5 million while the total labor effect will be close to $700,000. The total output effect consists of $766,000 in direct effects, $261,000 in indirect effects and $500,000 in induced effects. Furthermore, total employment effect is estimated to be 52 new jobs created by the Aiken Railroad Depot project.

Estimated Effects of the Reconstruction on the Local Government

One very important economic benefit of the Aiken Railroad Depot project is the tax revenue generated for state and local governments. Some tax revenues from tourist-related activity flow directly to local governments such as sales and property taxes. Sales tax is paid both by businesses and by final consumers. Property tax revenue arises from residents and businesses. The results of the study suggest that the Aiken Railroad Depot project is also going to enhance local tax revenues by $148,000 per year.

The investment in this project will produce spillovers that can permanently enhance economic growth. The Railroad Depot project will contribute to the City of Aiken in terms of economic growth, quality of life and community pride. A public building with multiple uses should be a catalyst for more downtown revitalization and should spark private sector confidence and investment. Aiken's efforts to honor its past and create opportunities for an enjoyable future will also have a significant effect on local tax revenues. It will also become a not-to-be-missed experience for locals and tourists.